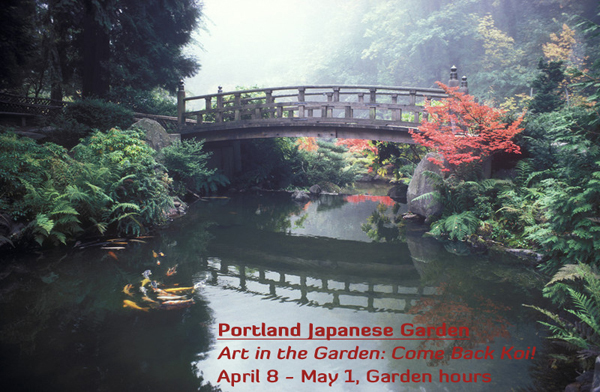 PORTLAND JAPANESE GARDEN – ART IN THE GARDEN: COME BACK KOI!

When you come it’s not only renovations that you’ll see but they usually have some interesting events going on such as Art in the Garden “Come back Koi” exhibition…
The title of the exhibition “Come Back Koi!” reflects the successful “Come Back Salmon!” campaign that took place in Northern Japan more than three decades ago, when the citizens of Hokkaido sought to restore salmon to their natural habitat at a time when the numbers of fish returning to spawn each year had begun to diminish. In addition to the aesthetic and ecological contributions of koi to the Garden, these fish are also the stuff of ancient legend, the most famous of which tells of a koi who swam up a waterfall and turned into a dragon, making the valiant fish exemplary of the kind of perseverance needed to succeed in all of life’s endeavors.

Portland Japanese Garden Lower Koi Pond.
This pictures was taken before the winter storm 2008 where there were a lot of koi

The Japanese Garden has a traditional kite created by four artists, and Naoteru Hayashi’s private collection of antique koi-nobori and nobori-bata banners traditionally flown on Children’s Day. Hayashi works for the prestigious Yoshitoku Company, a 300-year-old establishment specializing in Japanese festival dolls and accouterments. The elaborate banners being featured in the exhibition were hand-painted or decorated in the tsutsugaki style of paste resist, and flown atop bamboo poles from the households of families with male children. Although the exhibition closes on May 1, a selection of koi banners will decorate the Garden’s Children’s Day event held this year on Saturday, May 7, the day they will release the first batch of live koi to bring the Garden ponds back to life.

Woodblock prints of the colorful koi and koi-nobori banners by Tokyo print artist Kunio Kaneko highlight an exhibition that celebrates the legendary fish that glide beneath the surface of ponds and streams in Japanese gardens everywhere. Mr. Kaneko is a member of the Japan Print Association and is best known internationally for his small-scale, exquisitely rendered woodblock prints of koi. His work has been featured in exhibitions in Paris and New York, as well as in Japan. He has also exhibited with the prestigious College Women’s Association of Japan’s (CWAJ) Print Show in Tokyo every year for the past 18 years. On the opening weekend of the koi exhibition, Mr. Kaneko will be in Portland to demonstrate his woodblock printing techniques in the Pavilion on April 9 and 10 from 1–3 p.m.

The care and breeding of koi is a highly specialized and fascinating profession in Japan. National koi competitions in Japan and the U.S. can be compared to the world’s most prestigious dog shows. Mamoru and Taro Kodama, father and son experts on koi breeding and judging will be speaking at the Garden on April 14. The Kodama family owns Myoshiike, a 40-year-old koi farm in Japan, and Kodama Koi Farm in Hawaii. This lecture is part of a series of events that celebrate the release of new koi into the Garden’s ponds following a major renovation.

Garden is a place where we find peacefulness. Walkthrough the park makes you think or take your mind off things and relax. Portland Japanese Garden has secured its traditions in keeping the Japanese culture all through the garden. If you come around this spring make sure to have your camera ready because the cherry blossoms are blooming, leaves are changing colors and a few of the best colors in flowers just make you want to frame all the photos that you take there.

I must say it’s a picture-perfect place. Runaway from the busy life and take a moment to enjoy its beauty of the Japanese Garden.