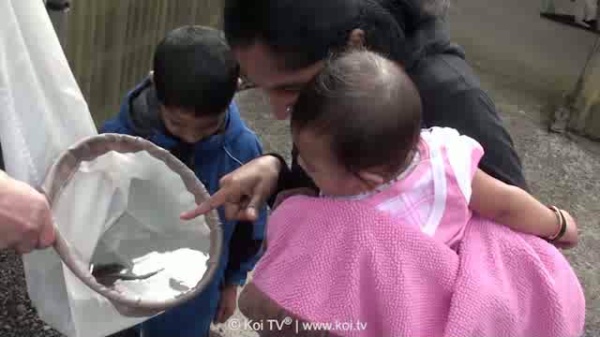 OUR KIDS KOI – A KOI FOR A KID

Kids love animals and birds. They like to grow them as their pet. The only pet in our house is koi. So Antony and I thought we will buy at least a koi for each kid. They get to name them and grow them. Once when we were attending Pan Intercorp live koi auction at Kenmore, Washington, our kids participated in that with our permission. Our oldest son Nikhil bought his first koi for 10 cents. It was a koi that was one and a half inch. We brought them over and trained Nikhil to take care of his koi. Nikhil was happy to have his own koi in the pond. During the summer he would make sure to feed the koi and change the water. He was really excited so much that he wanted to feed the koi every few hours. During the winter Nikhil was so worried that his fish might get cold and get sick.

Next our younger son got the same fever as Nikhil to earn money so he can also participate in the auction. Poor kid doesn’t know the value of money then he thought that coins were bigger than dollars. They were so excited to be a part in the auction. Nikhil and Nithin, they each have a koi. They named their kois too. We also like the idea, so we support them in their koi hobby in any way possible. We like to buy our kids small koi and have them grow them big. Koi will grow with the kids. That way there is a passion in the kids to care and understand koi.

Nikhil and Nithin started to learn the difference in kohaku, sanke, tancho kohaku and shiro utsuri etc. Nikhil have two koi, one longfin and a Shiro Utsuri and Nithin have only one longfin which we bought from Hoshi Koi Farm. We were in search for the second. Today, we picked an Asahi and an Aka Matsuba for Nithin from Children of the Sun Koi. Those koi were breed by Otsuka. Antony picked the Shiro Utsuri for Nikhil at a judging exercise held at the end of Kodama Koi Academy. Mamoru san picked that koi as the number one koi from the group of 15 Shiros at the end. In 2010 Nikhil entered that fish at the Northwest Koi and Goldfish club 30th annual Koi show and it won the friendship award from ZNA Nor Cal Club. He was very excited to get that award. From winning that award onwards they will be always close to me when we were bowling koi and measuring. They like seeing them in the bowl and touch them. They love it when the kois are fed from their hands. Now we are in trouble. Nithin scores one more in the number of koi.

Sumi showing Nidhiya her new Goshikis which Hoshino San and Antony selected for her fromAll Japan Koi.
Last year we were blessed to have a baby girl. We thought Nidhiya should have her own koi too. Just after the tsunami and earthquake that took place in Japan, Masaharu Hoshino san was here in Portland, Oregon for a few days with Tony Prew at All Japan Koi. We got an opportunity to have an interview with him. Antony used this opportunity with Hoshino san to learn to select goshikis that Hoshino San breed. We picked two goshikis for our daughter – a tancho goshiki and a regular pattern goshiki. At first, Hoshino san asked Antony to pick. Antony picked two koi and ended up to be the same as Hoshiyano san’s selection. Antony also picked a third tancho goshiki for learning its growth and the tancho pattern. The third Tancho goshiki had some sumi spots on its tancho. Antony would like to see if that tancho will turn into real tancho without any sumi spots in the future. Also the sumi on that tancho goshiki was a little harder than the other goshiki. He said he will share his learning experience in the future.