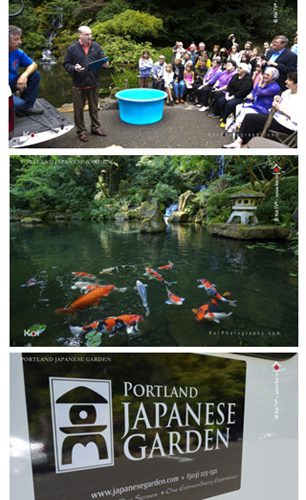 Few years ago we had a major winter storm here in Portland, Oregon. Most families in Portland were stuck at home beacause of the snow, during that winter The Portland Japanese Garden lost majority of their koi collection. Employees of Japanese Garden were not able to open or do any maintainence which was required to save the koi, for almost two weeks. That horrible disaster made Japanese Garden think of alternatives to keep the koi alive. A Japanese Garden is not complete without these living jewels. Koi (colors of water.) The board fo directors and the management committee conducted a fundraiser to renovate the garden and to bring new koi from Japan. In Japanese culture pond and koi has very important value to it. The belief is that the koi represent the dragon and bring prosperity and charm to the family and friends. The campaign will help the Japanese Garden regain their collection of koi and keep them healthy. The renovation project took almost two years to complete. The renovation project was lead by specialists in koi hobby. All Japan Koi dealer Mr. Tony Prew is one of these specialist in Portland, Oregon. Mr. Prew took the renovation project at the Portland Japanese Garden. The Japanese Garden allowed all their sponsor’s to name their koi. As a result to that, most of their new koi are named.

Last year during The Children’s Day festival The Japanese Garden released their first set of new koi to the upper pond. The sponsors got to select their koi and take pictures with their new achievement and release them to the new remodeled home. Japanese  Garden took all precautions not to have the same incident over agian. That was the committtee’s #1 priority for that matter the renovation included new filters and making the pond almost preditor free by making the pond deeper.
Japanese Garden is located in the NW Portland with an overview of the Portland city itself. The greenery and quitness will help calm ourselves. Members and sponsors of Japanese Garden has done a great job in organising this event. Sponsors, we Thank You for all the support and donations that you have contributed to the Portland Japanese Garden.

This year The Portland Japanese Garden released their second set of koi to the lower pond, which is almost like 70,000 gallons. Since this campaign was a great success the local channels and Koi TV® were there to capture 2012 release. For those of you who are interested in being part of this campaign there will be one more release next year. The aim is to release 20 more fish out of that 5 of them are already sponsored. Be part of this campaign and help The Portland Japanese Garden maintain its originality.